We stand in solidarity with the working class of Ukraine and Russia, who are not responsible for the violence and chaos currently being orchestrated in Eastern Europe, yet will be its ultimate victims. We support the anti-war protestors in Russia as well as Ukrainian expatriates whose families are being affected by the invasion. The United States should unconditionally accept Ukrainian refugees who are forced to leave their country as a result of this conflict. As socialists, we oppose authoritarianism, imperialism, and war in all its forms. As always, the rich and powerful will push for further American military intervention, as well as increased military spending, and we must oppose this at all costs. This conflict cannot be resolved positively with guns, tanks, or nukes, but with a unified international diplomatic response. We must say, “No to War!” 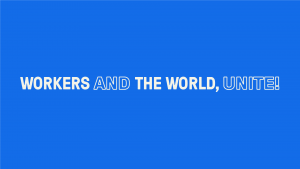